How to Get Harry Potter World London Tickets When Sold Out 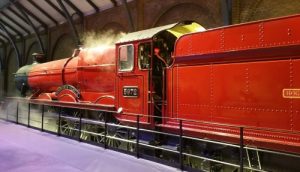 There are a couple of places to get Harry Potter World London Tickets when sold out that include transportation from Central London.

In general, you’ll pay about $100 for a basic ticket, $400 for a family package, that includes luxury bus transportation from Central London. More expensive packages include a fully guided tour or a full day trip with a visit to the town of Oxford, and these are the tickets that you’re more likely to find have availability when other places are sold out.

The journey takes between 60-90 minutes to Harry Potter World from Central London, depending on traffic conditions. You’ll spend around 3-4 hours at the studios, so in total, it’s a round trip of 7 hours.

The first place to look is here. This is the most basic Harry Potter World London ticket that includes return transportation from Victoria coach station, which is in Central London. You’ll travel in special luxury tour buses that include free wifi and the journey takes between 60-90 minutes depending on traffic conditions. You’ll have around 3 hours to explore the Studios and go behind-the-scenes to see how the Harry Potter films were made. A good place to look if Harry Potter World tickets are sold out, there are multiple departure times throughout the day, from 8am in the morning until 6pm in the evening.

The second place to look is here. This is the same itinerary as the ticket described above, but the package offers an additional 4-hour Hop on Hop Off bus tour of London, and is a good place to find last minute tickets. Bear in mind that Harry Potter World is the most visited attraction in London, so make sure you buy your tickets well in advance because they tend to get sold out fast!

The third place to look is here. This is the best way to turn a visit to Harry Potter World into a full day trip, and this tour tends to be one of the last places to get sold out. Departing from Central London, you’ll first head to Harry Potter World. After finishing your visit at the studios, you’ll then continue to the University town of Oxford, which is where many of the famous scenes in the Harry Potter movies were filmed. You’ll see this on a walking tour of the famous university. The tour departs from Great Portland Street Tube station in Central London.

The fourth place to look is here. This is the best ticket if you want to go on a fully guided tour of Harry Potter World London. An expert guide will show you around the studio, giving you lots of fascinating insights into the extraordinary Harry Potter World. The ticket also includes return train tickets to Euston Station in Central London. One of the great advantages of this tour is that you can spend as long as you want at the studio after the guided tour has finished, so there’s plenty of time to soak up the atmosphere, try a butterbeer, and visit the Harry Potter shop. (If you see that all the other Harry Potter World London tickets are sold out, this one tends to have last minute availability!)

We left suggesting the official Warner Bros Studio Website to last because this tends to be the first to get sold out. However, tickets do seem to come on the market randomly, so if you keep pressing the refresh button, you might just hit the jackpot and stumble across a few spare tickets for sale.